This is an old revision of the document!

The Shader Mixer Pane (Tab) is included in the Advanced and Pro editions of DAZ Studio v4.x. Stated simply, it allows you to create your own custom shader by connecting a series of bricks together, to form a shader_network.

Like Shader Builder (WIP), Shader Mixer provides a visual development environment for generating shaders based on the RenderMan® Interface Specification (RISpec), but it does it at a much higher level. Although functionality to integrate a block you create in Shader Builder exists, with Shader Mixer you don't actually have to write code or care about syntax and things like type_conversion are handled for you, in the background. 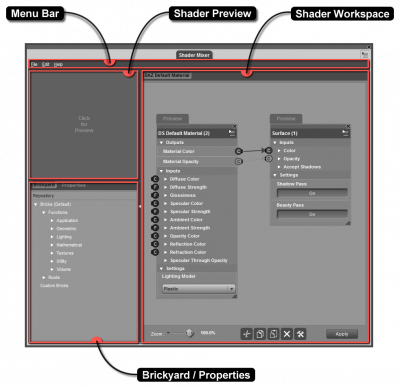 Below is a list of interface elements that exist within the Shader Mixer pane.