For new users, it’s best to use the default install path for content in DAZ Studio. Using multiple install paths and multiple runtimes is not a good idea for new users and can be a problem even for experienced users.

Keep in mind that these principles below are meant to help you understand the reasons why and how content works the way it does in DAZ Studio. They are not simple, step-by-step instructions, but principles behind why things work the way they do in DAZ Studio Content.

Please see this article for basic instructions on how to install and set up content in DAZ Studio:
http://artzone.daz3d.com/wiki/doku.php/pub/software/dazcontentconfiguration

Content (figures, animals, clothes) is provided as files. DAZ Studio uses two kinds of content. It’s own native DAZ Studio content and Poser format content. Poser cannot read DAZ Studio formats, but DAZ Studio can read most Poser content formats. A bit of history is necessary to understand why. The Poser application was created many years before DAZ Studio. Poser established several file formats (file type and file extensions) for content. Then, DAZ 3D began development of our DAZ Studio application. We wanted the new DAZ Studio to load all the Poser content that was available. But we also wanted DAZ Studio to have its own format.


If you browse on your hard drive to a DAZ Studio format content file, you’ll see that it will have one of the above extensions. You can see that almost all of them have “.ds” in them—a pretty good give-away that it’s a DAZ Studio file. The last file, “.daz,” is a DAZ Studio Scene File. Most presets you see in the DAZ Studio portion of the Content Tab will be in .ds or .dsb format.

Here’s the clincher. Poser format content is fairly restrictive for what each file can do. In Poser (and DAZ Studio which also reads most Poser format files), these files below just load geometry into the scene. With the uncommon exception of DForm or Magnet presets saved as props, these formats never modify geometry already in the scene:


The above Poser files load “geometry” into the scene. Geometry is any model. For DAZ Studio and Poser, the native geometry format is the .obj file.

But these Poser files never load a figure or prop (geometry) into the scene.

POSE (.pz2) This versatile file can be used for many different things: to pose a figure, to apply a texture, to inject a morph
HAND (.hd2) This file poses either the left or right hand
FACE (.fc2) This file poses the face


These files above only modify geometry that is already in the scene. These are the second kind of Poser format icons you can use in the Content Tab.

NOTE: The light preset (.lt2) is neither geometry nor something that modifies geometry. DAZ Studio can read this file format also. But most content tab icons in Poser format will be one of the six above files. Poser 6 and higher also supports a material preset file (.mc6). DAZ Studio doesn’t read these files, but rather uses its own format (.ds or .dsb) for texture presets, like shaders.

Most content icons can be divided into two different types

The Content Tab can have all sorts of icons in it, both in Poser and DAZ Studio format. You can load a figure, change the figure, load a light, load a shader, run a script, and even more. But 90% of the stuff in the content tab can be divided into two different types:


FIGURES, PROPS, and HAIR load geometry into the scene. HAND, FACE, and POSE files modify geometry that is already in the scene.

Principle 3 : Most content is in Poser Format, not DAZ Studio Format

Most content you use in DAZ Studio will be in Poser format.

Even though DAZ Studio can use both Poser and DAZ Studio content formats, most of the time, your content in DAZ Studio will be in POSER-style format, especially for base items, like figure bases, hair (figures or props), and poses. A product will typically be provided in Poser format with DAZ Studio presets for optimized textures. This is true for Victoria 4.2 base. The base figure is loaded as a .cr2 file which is a Poser-style format file.

This has to do with DAZ 3D content products. Some DAZ 3D customers use only Poser, some only use DAZ Studio, and some even have the nerve to use both. DAZ 3D Content products need to cater to all these different users. Since DAZ Studio reads Poser-style files, but Poser doesn’t read DAZ Studio content, the common denominator is the Poser format. For this reason, the most commonly used format is the Poser format.

The installer for a DAZ 3D content product is designed to write all the files and folders that are needed for a product within this folder. If you direct the installer to the correct folder, then it will do its job and put all the component files into the right place, for an easy install. This is true for DAZ Studio 2, DAZ Studio 3, and DAZ Studio 3 64-bit version. Despite the change of the default content path from the Program Files folder to the users folder, this principle is still correct. This is because the ‘runtime’ folder is always just inside of the ‘Content’ folder.

You may think it’s a bit confusing with all of the different above paths. In fact, you could even choose to have the content folder anywhere on your hard drive. These choices also work:

In all of the above examples, the ‘runtime’ folder is inside of the last folder. So, for example, in DAZ Studio 3 in Vista, this is the default path:

The runtime folder for Poser-style content is tucked right inside here:

For the customized location suggested above, the runtimes would be here:

So, it really doesn’t matter as far as the folder hierarchy is concerned where the content folder goes. It just needs to be the one containing the runtime folder.

Think of it in the above terms, …content\runtime, and you will have the essential idea figured out.

ILLUSTRATION of how Directory paths in DAZ Studio 3 correspond to the Content Tab. To see the Directories, go to EDIT (PC) / DAZStudio (Mac) –> Preferences –> Directories. 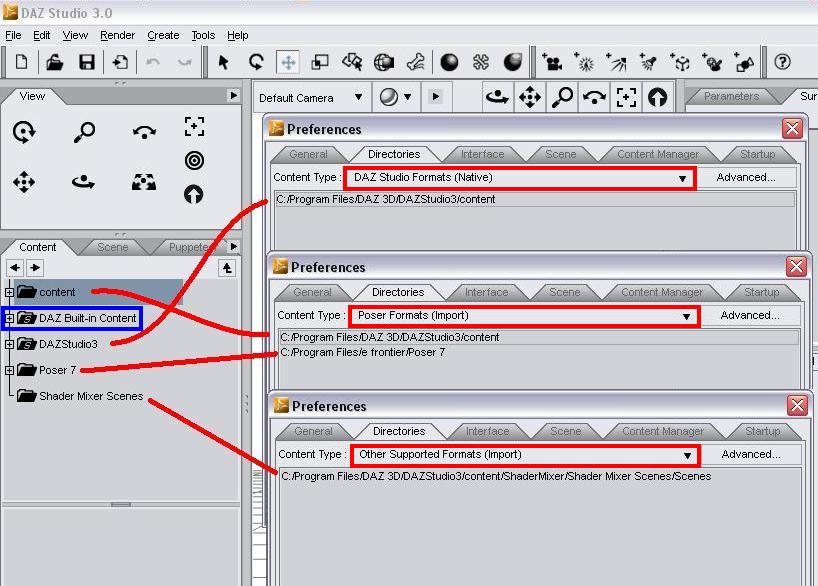