Now I have played a little bit with bryce and lightning in several configurations. Here are the results.

It needs some time to initialize all clients (up to 15 min with 4 clients), and for this time bryce slows down a little bit. It works faster with Ethernet switches than with hubs. An older Realtek 8193 Ethernet card stucks, then I switched off the “wake up” features and it worked fine.

Because i found so less Problems, I started to produce them for myself and switched off the main-fuse (and hard-resettet the laptop) while rendering. After rebooting bryce continued rendering (it was setted to “pause”) nearly there, where I interrupt it.

I Network rendering without Network

Even with a single computer, it is possible to use Lighning. Rendering in backround while working in bryce as usual works fine. The render takes little longer as rendered direct in bryce.

If there´s no networkhardware in, setup a “faked” one, using serial, parralel or ir. Once thre is a IP assigned, Lightning will use it.

You can link 2 computers with a simple crossed ethernet cable and take one (or both) to render in backround. This semms to be a little bit faster as with a hub/switch

Very easy- start the clients and klick on “search” Bryce will find the clients. (Its possible to put in the ip´s also, but I dont need it, Bryce found the clients everytime) 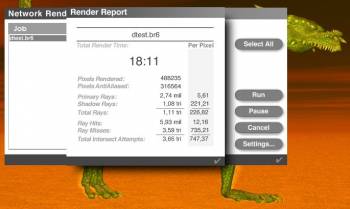 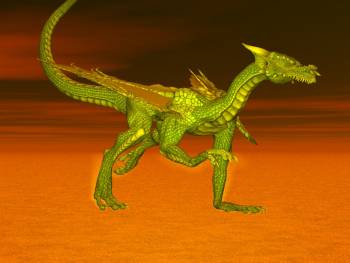 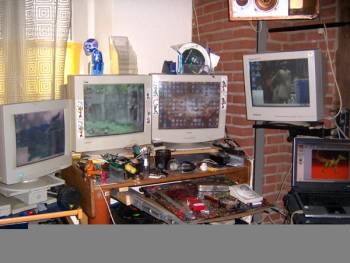 Setting up a net render (step by step)

Assuming you have a already working net, ethernet or wlan. On each comp that you want to use as node, you start the Lightning 2.0 (This is distributed with Bryce 6.1) 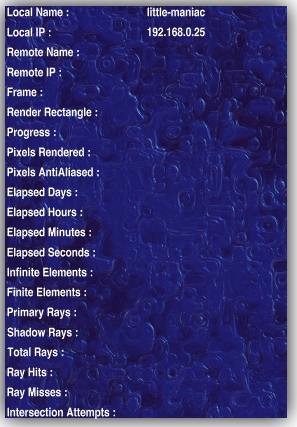 than you load or draw your artwork, setting the render option and go to File/Render Animation 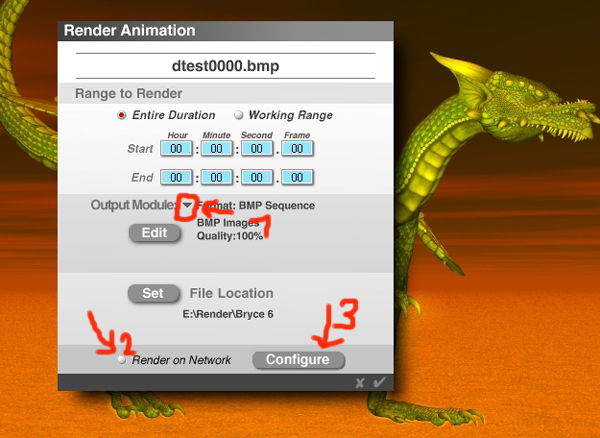 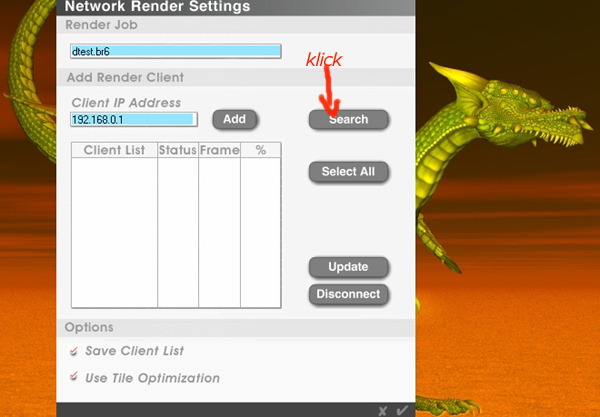 Now Bryce should find the nodes, otherwise you must use the “add” feature, but I never must do that. 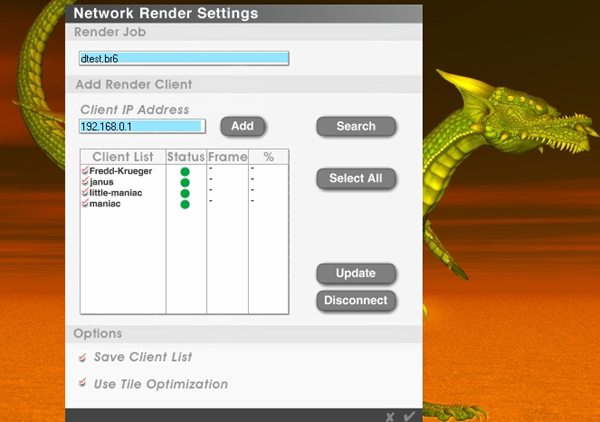 Hit “select all” (or the nodes that should work on this file, the red hook on the left side indicates selected nodes) Slowly, in several Minutes, one after thy other,
the lightning windows look like this: 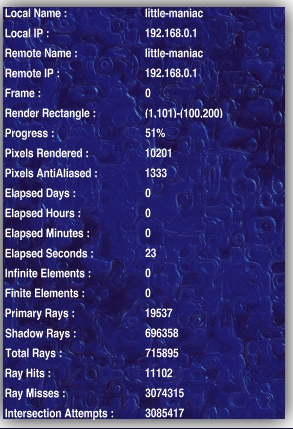 Also you can see the rendering going on here: 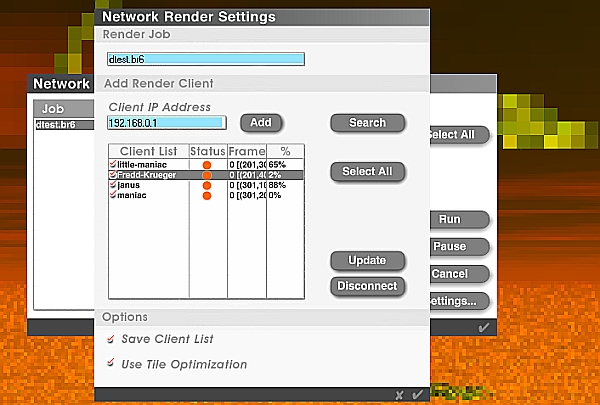 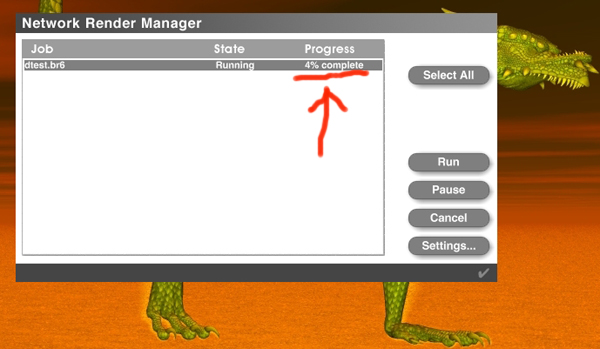 Note: But there is a trap !

If you override a pic, ig you render 2 pics with the same name at the same location, Bryce will ask you “Do you want”… That´s correct and kindly. But he put the window down under all the rendermanagerwindows, you dont see it. That´s silly. And nothing happend, render just dosn´t start. You have to click all away and answer bryce. Keep that in your mind.

So, when all this works, you can put as much renders as you want in the cue, can pause it or give each node just one render, or group it….

2 things improve my feeling when I work like this: I can work in Bryce, Preview- Spot or normalrender as usual, while the finished work renders in the back …. AND…. When Bryce crashed, even when the powerline brakes down while a very huge pic is rendering, the works going on at that point where it brakes, when i start Bryce again. Mostly.

The second is the directory “Temp” in the Directory, where “Bryce6.exe” is located. For each job which is in the “Network Render Managers” list, Bryce installs a subdirectory, named by at least 28 digits long random filename, like “5be6688de65aaee55deff43fe56fe”. In this directory Bryce copies the source file with name “source.br6”, for each frame a numbered file “nnnnnnnn.frm” and at render-time a file with name “jobinfo”.

It´s a good Idea to pay attention that Bryce has enough temporary space. Depend on the amount of the scene and the quantity in the batch, Bryce needs a lot. If Bryce is running out of temporary space, the program became pretty instable.

You can move the Systems “Temp” directory to another location, may be with more free space or more easy to observe (it´s often full of junk from diverse programs) by setting the “path”: 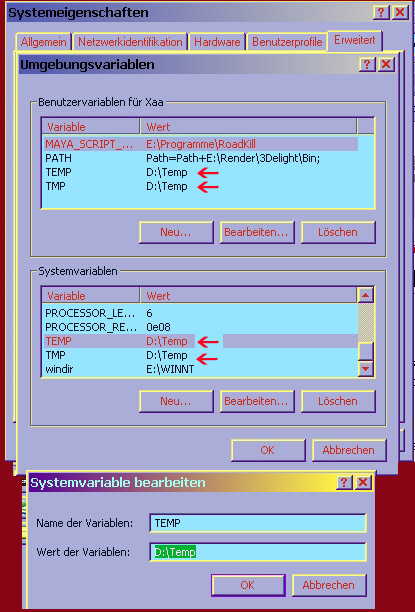 
About Networking with Windows (Tips which could possible be helpful)

How to build a cheap netware-tester in 3 Minutes.

This tester is not a high sophisticated instrument, but it cann often very usefull if you start to setup & cabling. You can use it in Vito, that means with a running net. Putting in a Cable tells you:

And someone who solder 2 small wires for you. 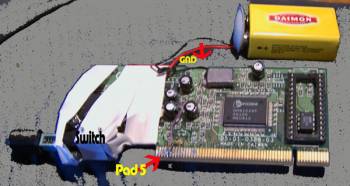 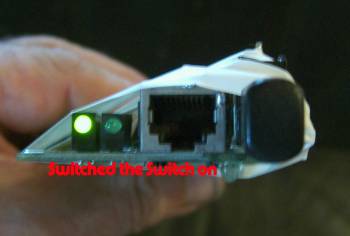 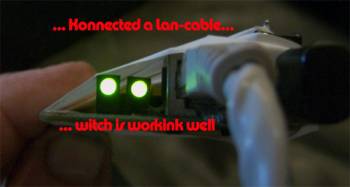 How does it work ?

Net cards are striving work-crazys. (And no unionists). So they do most of the work alone, without the help from Cpu, and stack the received Data in the Buffer allocated on theyr card. CPU or DMA only have to fetch them. Sure, the Card will only send nothing and work in standard configuration.

The chips are in C/Nmos technology and can workin a wide range of power supply. So we can put 9V to the 5V <pad. If they were build in TTL Technology, which is very widespread, they were killed immediate. But they are MOS. MOS = Metall oxyd semiconducters TTL = Transistor-Transistor Logic

More from this boring technical stuff

Here are some technical things about the (normal win pc ) net: May be there are some differents between USA/Europe, correct me please

The standard for PC/Win in Moment is a 10/100Mbit TBase twisted pair net. 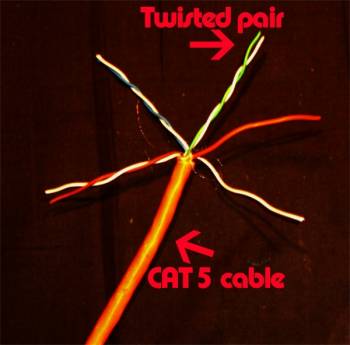 The norm for the cable is “CAT5” The connector at the interface card /switched is a RJ45 Female. Only 4 pins are used (also only 4 wires of the 8 wired cat5. {In German office nets often the rest 4 are used for ISDN.Phone net})
The used pins are (Network Interface Card = NIC)
1+2 for Transmit and 3+6 for Receiving Data.

It´s clear, all NICs must be equal (all cars must drive left or right side),
so you can´t connect 2 NIC´s with a straight cable, look this: 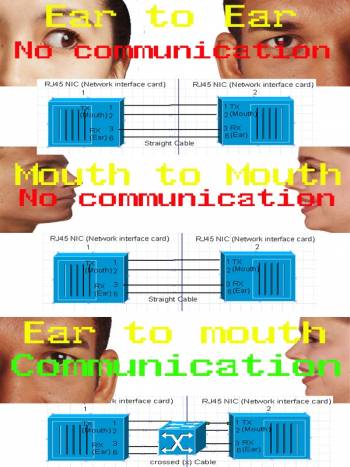 No its clear, why you need a crossed cable to connect two computers, but that´s all what you need for this job. In German you get already made cable very cheap (2-3$) They often have green or red connectors and are signed.

However, here is the pinout: 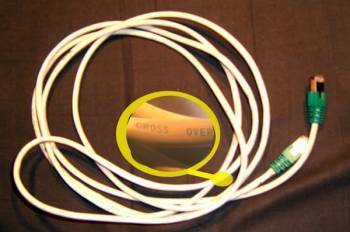 ……. now we know, why a xcable is used to connect 2 computers.
But why we need straight cables to connect more than 2 via hub/switch ? You´ll get the answer…

Practical Tip: Be careful with the nose

The first thing, that will happen, is to break the nose (which fixes the connector in the whole).
The cable still works, but a little goatish 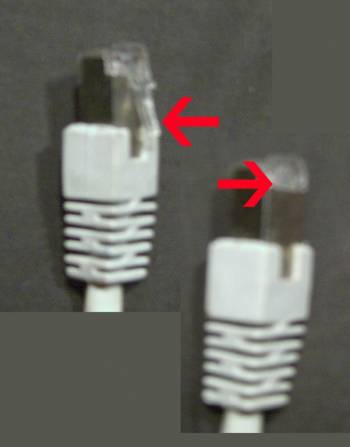 To close this part,

some words from Frank Zappa

I do it all the time

Every (communication)hardware has a unique code, world-wide and exactly one for each part (not for a series). This is could MAC.
It´s given by factoring and is not changeable.
MAC = Media Acces Control(Adress)

This is used by the ethernet protocol to identify Sender and acceptor of an information. The sender puts the MAC of the receiver in the “Adress Label Part” (means Header) from the Information-packed and sends it to all connected computer in the net. The other computers compare the MAC with theyr own, if it match they take the packed.

And here is the different between hubs and switches:
A hub routes all package to all computers.
The switch knows, on wich port/segment wich MAC is connected and switches the packed only to the right adress.

So put away the hubs and forget about, he is right, there is no reason to use hubs anymore.

And that´s an fast, new and cheap switch:

As you see in the pic, the connectors in the switch are already crossed, so you just connect one computer with one port, using straight cable. To connect the next switch, you must take xcable again (switch to switch) or, if available the “uplink” connector. that is nothing else as a not-x-port.

So, back to beginning, the answer is as simple as it could be:
You don´t need crossed cable for connecting a switch because the connectors are already crossed.
The pinout:
1 RX+
2 RX+
3 TX+
6 TX-

To amuse you a little bit, I give you at least a look to my working place.
A big red Cat5-wire awaits me to start work. 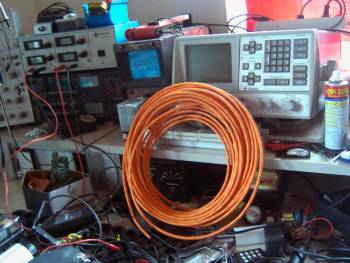