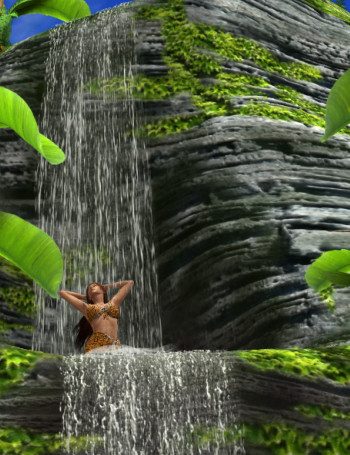 The Nerd3D Water Fall Tool can be used to simulate a water fall or rapids in Poser and Studio. This tutorial uses the Nerd3D Tropical Cove set as a location for the falls.

Load up the Water Fall Tool and look at the scene from the side with one of the isometric cameras the Water Falls' mechanism will be quite obvious. You may also want to switch the scene to Outlined View (Ctrl-2) so you can really see the shape of the Fall's “belts”.

There are 3 basic components. The Control Handle where all the dials are stored, the Splash prop and the Falls Prop. For almost all situations you will want to use only the controls located in the Control Handle. Try to avoid moving the magnets (deformers) that are built into the tool. They have been very carefully setup and can be controlled by dials in the Handle. 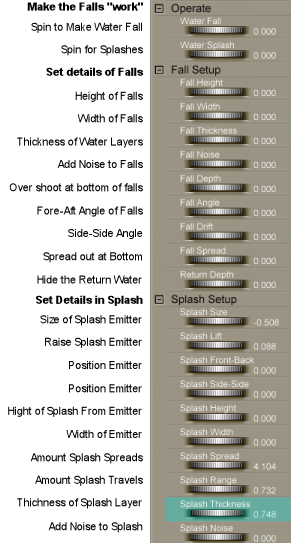 The Falls is basically two conveyor belts pulled through magnets to produce a convincing water fall effect. The Falls Is pulled down to meet the Splash. The splash effect is created as its' belt rotates in the water at the bottom of the falls.

The Falls setup group is most important. Set the Height of the falls so it is just a tiny bit above the brink where the falls begin. You can adjust the width to match your needs. If the falls are very wide place several tools side by side. The thickness is to adjust the appearance of the volume of water doing over the falls. Noise is just that is randomizes the falls. The Fall Depth is to control how far the falls belt goes below the water line. This needs to be set so the curve at the bottom is below the water line. The tool attempts to set this automatically but you may need to adjust it manually. The Angle, Drift and Spread are used to simulate wind blowing the falls water. It can also be used to lay the falls flat to simulate a rapids or other rushing water. Return depth is how far back the return water will go Adjust this so the returning water is hidden in the cliff.

The Splash setting are used to produce a convincing splash down at the bottom of the falls. The size of the emitter is simply the diameter of the belt that produces the splashes. Splash lift moves the whole emitter up and down. Front-Back and Side-Side are used to place the splash where you want it. Splash height allows you to control how high the splashes go. The Width is the starting width of the splash and Spread is how much the splash spreads as it travels. The Range sets how far it will travel. Thickness adds volume to the effect. The Noise dial is really the key to a convincing effect. It creates the turbulence present in a real splash. Don't be afraid to crank this dial. settings as high as 10 are not excessive. Note that more noise in the splash will increase the number of transparent layers that need to be rendered and it may increase render times. 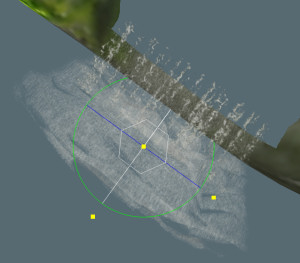 There are a bunch of preset Falls Settings and you can use them for an example if you like. But you can build you own Falls and even animate them if you want. Let's make a Falls and tweak it around a bit. If you don't already have it loaded you need a Falls Tool and the Tropical Cove. Select the handle of the Water Fall Tool and open the Parameters palette.

Now use the Falls Height dial to set the falls to be just over the brink. You may need to go back and forth between positioning and height to get it just right. Check that the Falls Depth is sufficient that the return curve is well below the water line. Also make sure the Return is enough that it is hidden in your cliff or whatever. Tweak the width and thickness to your liking and add noise if called for in your scene.

The splash is what really sells the effect. The position and scale are very subjective to the size, height and volume of the falls. But basically the first step is to position the emitter so it is just behind where the falls land. Now position the height of the emitter so it is almost totally under the water. Use the Spread and Range to make the splash radiate. Now add lots of noise.

Ride a Barrel Over the Falls

The presets included with the Falls are a very good starting point for animating the falls. Basically you setup the falls as in the previous section. Then you set the range of the animation and spin the Water Fall and Water Splash dials so the fall rate seems realistic. There area some quirks. It seems backwards but higher falls need a slower rotation of the Fall's Belt. It's because the same number of polygons are covering the distance in a tall water fall and in a short one. The splash however should move at roughly the same speed. But as the splash gets bigger it needs to rotate more slowly.

In the end the animation in the falls is totally controlled by 2 dials. The Water Fall and Water Splash dials do it all. It up to you to set the speed of the dials to look right.

Using the Fog Tool for Mist

Really big water falls are always shrouded in mist. This is the perfect task for the Nerd3D Fog Tool. You can make the fog tool enshroud the falls by using the Fog Magnet that is included with the Fog.

Load a fog tool and position it at the base of the falls. Now load a Fog Magnet and position the zone so it centers at the base of the falls. Translate the magnet up until the fall is mostly covered by the fog. You may want to scale the X and Z of the magnet down to make the fog narrower as it nears the top of the falls. You may want to move the fog tool so it is below the bottom of the lagoon. This will make less of it visible in the water and speed rendering. You may also want to add some Y Noise and Random X to the fog's settings.

Use very thin materials. In this example I used the “Smooth D1” material. Thin Wisps D1 would work well too.

Water is probably the hardest material to get right. I've included several choices. The included materials are not ray traced. After some very long renders as experiments it was obvious that the falls didn't really benefit much from ray tracing. But the tropical cove set does include ray traced water materials. They really sell the scene and I recommend using them. I've included some conventional materials incase you need a quick render.

Ray Traced materials require you to use Fire Fly in Poser or 3Dlight in Studio. Set the ray bounces to at least 3.

Can the water splash? Except for the splash tool at the bottom of the falls, no. This is not a real particle based water simulation. Splashes are, for now, post work.

Does the Tropical Cove's water work with the Wave Tool? Yes it does. Select the “Water” and load a wave tool. You will probably want to scale the wave tool way down to fit inside the cove.

Can I use the Water Disk from the wave tool instead of the cove water? Absolutely! Just hide the Cove's water and load up a Water Disk. This is great for creating an island scene.

How can I change the speed of the included Animations? Poser has a built in function to speed or slow animated sequences. Select the figure that you want of change and choose Animation > Retime Animation … 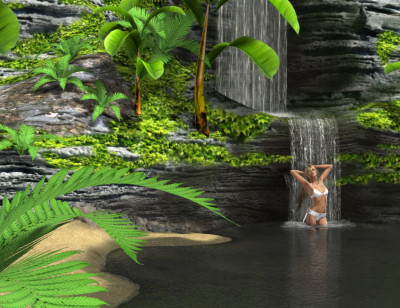