This set uses high resolution textures and ray traced materials. In short it will tax your system. Conservative render settings will help you get good results without waiting ages for a render.

You must use the software render in Studio and Poser the OpenGL preview render won't give you good results. All the promo images were rendered using setting like these. 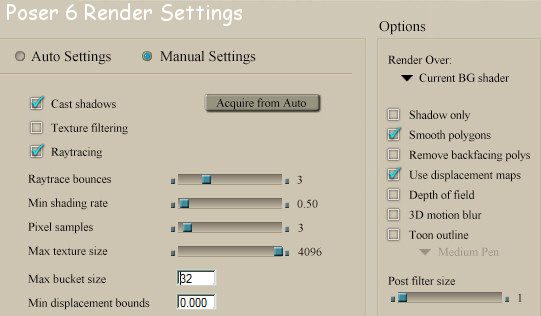 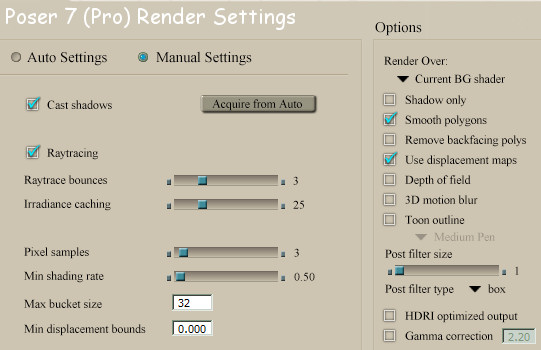 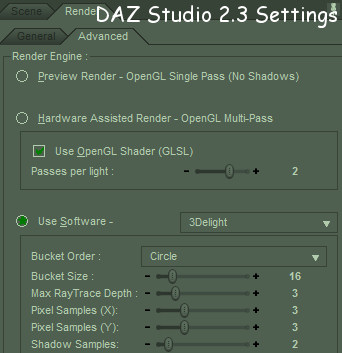 Why is a weird shadow covering half the water in the cove in Poser? That's Poser's “ground” prop. Press [ctrl] + G to toggle it off.

Where can I get the Water Disk used in the Promos? The water disk is part of the Waves on the Beach set. You can also create your own ocean quite easily. You need 2 planes. The first will be the “seabed” set its color to be about the same as the sand at the bottom of the lagoon. The second plane is the water. Copy one of the included water materials to your new water plane. Poser users can even use wave deformer to add simple waves. If you use a secondary water prop remember to hide the cove water.

Can I turn off the plants? Each of the plant types is a separate object. So the trees, Ferns and the geometry based portion of the ivy can be hidden. The moss is part of the textures.

In Studio, can I make displaced ripples in the water instead of morphed? There is a displacement map included. I didn't do displaced ripples on the ray traced water because they render painfully slowly. If you want to endure the render times add the N3DTurbulence.jpg map to the displacement map. Set it to 100% and about +5 for a good starting point. The Poser version uses a procedural displacement so this doesn't apply to poser uses. Why doesn't the reflection and refraction show? For the reflecting and refracting materials to show you must use the Advanced render on your program. In Studio that's 3Dlight and Poser it's FireFly. You also need to enable ray tracing and for good results at least 3 bounces.