Buy this Product for Poser and DAZ Studio via this link: http://www.daz3d.com/i.x/shop/itemdetails/-/?item=7357&_m=d 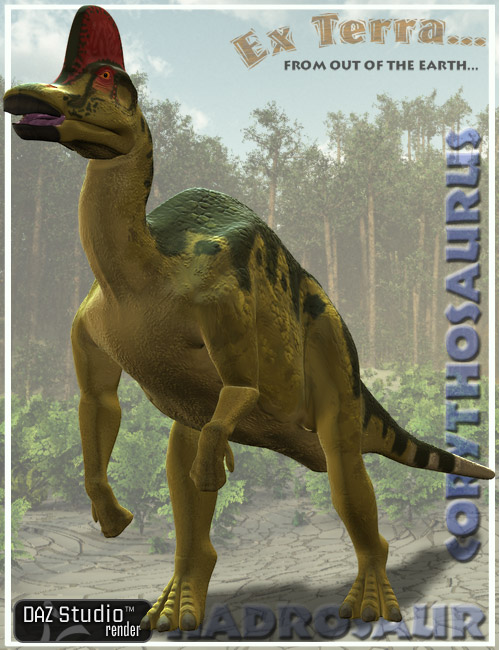 Corythosaurus casuarius - a large lambeosaurine (hollow-crested) hadrosaur (Duck-billed dinosaur) common to the Late Cretaceous period of North America. Along with its close relatives Lambeosaurus and Parasaurolophus, it roamed the plains of Western Laurasia (North America) in huge herds, between 80 and about 73 million years ago (“mya”). Think of them as the bisons of the Late Cretaceous…

The Genus name Corythosaurus refers to the rounded crest possessed by adults of this dinosaur, and mean “Corinthian (helmeted) Reptile” The Species name casuarius refers to its similarity to the Cassowary, a large flightless bird native to Australia, which has a similar crest.

Adult Corythosaurus were about 9 meters (30 feet) from the tip of the beak to the end of their stiff rigid tail. Their bodies were deep and heavy. Like all dinosaurs, they hatched from eggs. Infants were approximately cat-sized, and we have fossils of all the intermediate stages of their growth. There appears to be a great deal of variation in the size and shape of the adults' crests, but it is not known how much was due to gender differences, and how much simply due to individual variation. It is likely, however, that the males used the air passages in the hollow crest to aid in production of their mating calls. The crests were also likely quite brightly coloured, as an additional part of mating displays.

Hadrosaurs (or 'Duckbilled Dinosaurs') were one of the last major dinosaur groups to appear. They apparently evolved from small iguanodonts in the first part of the Late Cretaceous Period, about 100 million years ago, but rose to prominence about 80 million years ago. Over time, they had lost their thumbs, and their plant-eating beaks became more pronounced. In the early days of paleontology, their deep narrow tails and apparently-webbed fingers made them seem like aquatic animals (in keeping with their ducklike beaks). Now, however, we know that the three middle fingers were actually enclosed in a hooflike mitten of flesh, and the hadrosaurs were found in a variety of environments.

There are two major groups of hadrosaurs - the first, known as Lambeosaurines, were identifiable by the large hollow crests of bone on their heads. The other group, the Hadrosaurines, either had smaller solid crests or no crests at all, and broader beaks.

The late Cretaceous is well represented by Poser/DS dinosaurs. Among the plant-eaters, in addition to the hadrosaurs, this was the period of the ceratopsians (hornheads such as Triceratops and its relatives), as well as the armoured tank-like ankylosaurs. Preying on all of these plant-eaters were the fearsome tyrannosaurs, as well as mid-sized (dromaeosaurine) 'raptors. Birds were common, and the last few giant pterosaurs also flew overhead - the last few Pteranodon might have been around at the beginning of the hadrosaurs' reign, and the even larger 'azhdarchids' (Quetzalcoatlus etc) were around until the very end of the Cretaceous. Many modern types of plants had appeared, although there was still no grass.

The oceans at the time were ruled by giant lizards called mosasaurs, as well as fish-eating plesiosaurs and giant turtles.

Specifically, though, the North American lambeosaurines were most common about 10 million years before the end (although they apparently lingered much later in Asia). Corythosaurus would not have had to worry about Tyrannosaurus rex itself, but would rather have contended with earlier, slightly smaller (9-meter) but similar tyrannosaurs called Daspletosaurus and later on, Albertosaurus. Likewise, among the ceratopsian hornheads, it was too early for Triceratops itself, but Einiosaurus and the many-spiked Styracosaurus were around. 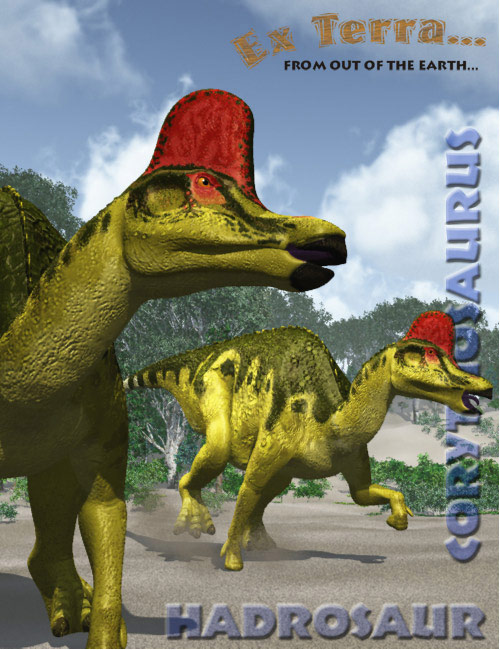 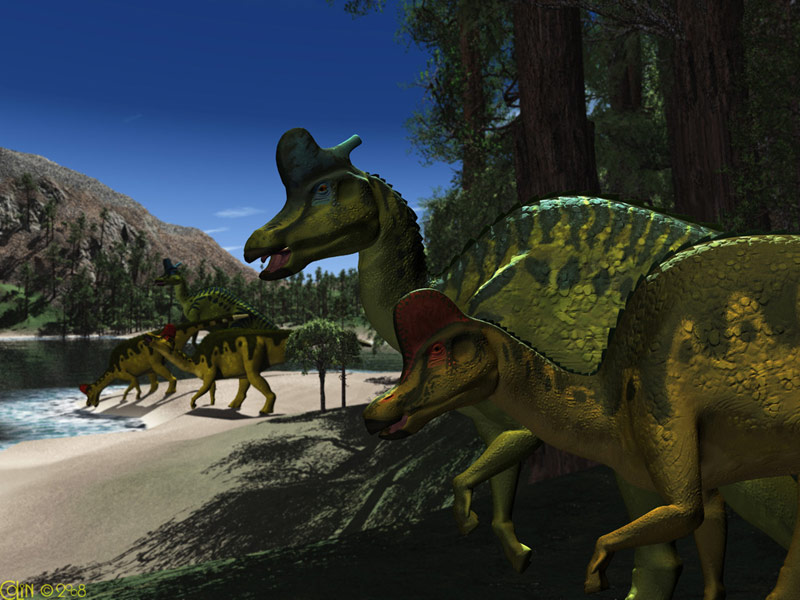