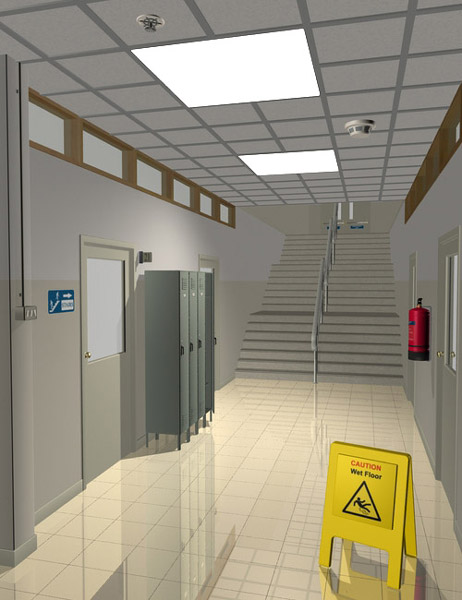 The Interiors Series
Each of the packs in the Interiors Series is a single room or similar environment containing all the figures and props in one file. Every scene is self-contained and loads with everything pre-positioned and ready to use. Lighting is included, and the figures and props are available separately in the library, so they can be loaded as extras or used in other scenes.

The basic room module is a 600x600cm room with walls, floor, ceiling as posable body parts which can be switched off/on. By maintaining the same measurements (or multiples of them), and standardising all sizes, it will be possible to fit rooms together, or use walls and doors from one scene with another. All figures and props are built to real-world scale and can be interchanged between scenes, or used with other products made to a similar scale, for example, the Home One Products. As the series grows, the packs will cover as wide a variety of situations as possible.

Interiors #11 - Corridors
This is the 11th pack in the Interiors series. Corridors is a versatile set of props which can be built up into interlocking corridors. The pieces can be combined with rooms and other environments, and textured in multiple ways for different looks. The product comes with a Help File which gives full details, and is included in the Help section below.

Overview
The Corridors is a system of modular units which fit together into multiple configurations. You can build up a vast network of interlocking corridors, or use a single unit and populate it with props, or add rooms leading off it. The corridors can be used with other Interiors packs, such as The Hotel, The Office or The Classroom by matching the walls/doors and switching off one set, to create a corridor with rooms behind it. Most of the wall and floor textures from other Interiors packs are also compatible with Corridors and can be used as alternatives.
Important
The corridor pieces are posed in 'jumps' and this is achieved through scripts, not normal pose presets. This pack is available in 2 versions - DAZ Studio and Poser - and you will need the correct version for your software. If you use DAZ Studio, you can load corridors from the Poser version, but the poses will not work. Only the pose scripts in the DS version will work in DAZ Studio.

Measurements & Posing
The basic corridor unit is 600 centimeters in length, (approx. 19.7 feet), and all measurements are based on this size. The main pose presets move an object 600cm in the chosen direction - forward, back, left or right - and position the corridor units in line with one another.
Example #1 - Load a corridor and crossroads. Select one of them and apply one of the Z poses (forward or backward). The two pieces fit together perfectly.
Example #2 - Select the corridor and apply the Y turn pose, then the Move Left pose. The corridor now fits with the left-hand side of the crossroads. Apply the Move Right pose twice to position it on the right-hand side.
Corridor walls, floor, ceiling and other units are also included in half (300cm) and quarter (150cm) sizes, with a set of pose presets for each of those sizes.
The distance to an upper floor is 300cm, the height of a wall, and you can stack corridors to form new levels. Use the Move Up/Down poses to raise/lower objects.

Rotation
The origin or pivot point of corridor and wall objects (except for doors) is in the center. This is to allow standardised rotation of corridors, and also to avoid doubling the number of walls included. Any wall can be used on the left or right side by rotating it twice with a Turn pose. It will then be positioned correctly on the opposite side.
Example #1 - Load up the crossroads and arch. Select the arch and use one of the Turn poses to rotate it in 90 degree jumps. Because it rotates around the center point, it's positioned perfectly at each of the 4 crossroads with each turn.
Example #2 - In the default position, the arch doors open outwards from the center. If you want them to open inwards, rotate the arch 2 turns (180 degrees), and apply the Move Back pose.
Example #3 - Load up a floor and any wall of the same unit size (600 or 300). Select the wall and apply a Turn pose twice to position it on the other side.

Variations
Although 600cm is the standard jump, I found it was impossible to make it work with every piece. Certain combinations of corridor, distance and rotation result in inconsistencies and require an additional movement, usually of 150cm. This is why I included an extra set of jump poses for 150cm.
Example - Matching a rotated corridor to the T junction or left/right turns, requires a Z translation of -750.

Corridors 300 & 150
There are 3 sizes of corridor - 600, 300 & 150. The 300cm units can be used to fill in gaps, or create cupboards, toilets or small rooms. There are 3 window units which can be combined with the other 300 size walls to have a window and door on one wall. These were intended as office windows, but they could conceivably be store display windows too.
The single wall units can be combined in multiple ways with the floors and ceilings. You can use two 300 walls with a 600 floor/ceiling.

Other Units
Arch + Doors - An arch with swing doors. Can be placed anywhere in a corridor, or at the end as an emergency exit/fire door.
Column - Can be placed anywhere in a corridor. It has a light switch and cable.
Dead End / Dead End Door - 2 units to seal off a corridor. One blank, the other with a door.
Doors / Doors 4 - There are 3 styles of door - plain, with glass and an office door. I included 4 of each door in the library, already positioned to fit in the corridor.
Elevator - A single wall with an 'open doors' morph for both elevator doors.
Stairs - These lead to an upper level at a height of 300cm.

Props
Cup / Cups - Plastic drinking cups for the water cooler. Note that these use a displacement map to give a ribbed effect.
Fire Extinguisher - To use the fire extinguisher by hand, make the bracket material invisible.
Light Panel - For use on the ceiling as an alternative to the neon striplight.
Locker - A locker with posable door for use in school scenes. You can stack a bunch of them side by side to create a locker area. (Move each locker a distance of 28cm).
Neon - A ceiling striplight with off/on presets
Signs - 7 signs of various types for use on walls and doors. There are various textures for the signs, and some can be used on several different signs. The 'sign on' preset set Ambient Color to white, and can be used to fake an illuminated sign, such as an exit.
Smoke Detector / Sprinler / Ventilator - Accessories commonly found on ceilings in offices, schools and other buildings.
Water Cooler - The one place in an office corridor where everybody likes to hang out.
Wet Floor - Even 3d floors need to be washed now and again.

Materials
Floors
Floors have 2 types of materials - the floor which is used for the carpet and studded floor textures, and the 2 floor tile materials and grout (the cement spacing between the tiles). These are separate sets of materials and when one set is used, the other is invisible. This gives you a wider choice in flooring. The 2 floor tile materials can also be given different Diffuse Colors when used with a single texture, as seen in the parquet preset. Note that floor_tile2 has been rotated 90 degrees on the UV map to give a more realistic look.

Walls
The default wall texure (scheme 1) and scheme 2 both use displacement maps, so you won't see the full effect until you render. Scheme 1 is a painted brick effect, and you can change the Diffuse Color to anything you like. Scheme 2 uses ceramic tiles on the lower part of the wall and plaster on the upper part. Scheme 3 uses plaster on both parts of the walls, but with different Diffuse Colors. Note that some of the tiles (wall and floor) use a low reflection strength.

Tips
Use the 'ceiling off' preset to get a better view of your scene from above.
Make the baseboard material invisible for a different look.
Color floor_tile2 to get alternating tiles.

Thank you and enjoy your new products!